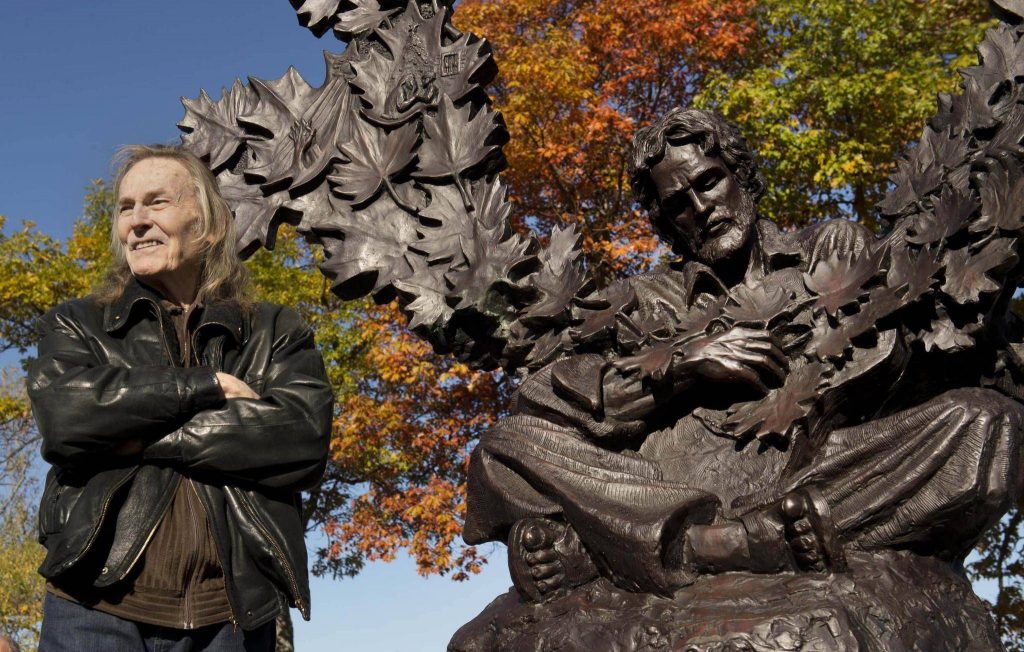 On what turned out to be a picturesque fall day, a crowd of more than seven hundred gathered in Orillia’s J.B. Tudhope Memorial Park for the unveiling of the principal monument of Golden Leaves: A Tribute to Gordon Lightfoot. Golden Leaves is an artistic project honouring Canadian folk icon and Orillia native Gordon Lightfoot. The project’s first phase, unveiled on October 23, 2015, is a 13-foot bronze sculpture located at the tip of Tudhope Park with beautiful Lake Couchiching as a permanent backdrop. The hometown folk legend attended the event with his family and was visibly moved by the piece.

Statues representing Lightfoot’s iconic Canadian folk songs will be installed in Orillia and other key places in Canada and the United States. The first song to be immortalized in bronze is “The Wreck of Edmund Fitzgerald”, also located in Tudhope Park as part of the Lightfoot Trail. The next cast will be unveiled November 10, 2015 at the Great Lakes Shipwreck Museum on White Fish Bay, Michigan.

Ontario-born Timothy Schmalz, creator of the world-renowned “Homeless Jesus” sculpture series, is the artist behind these incredible Lightfoot-inspired pieces. Schmalz, who worked on Golden Leaves while listening to “Gord’s Gold”, described Lightfoot as “Canada’s Shakespeare” and tried to represent Canadian identity with portraits of some of Lightfoot’s most celebrated songs.

Christopher Bratty, President of Land Development at The Remington Group, and the Rudolph P. Bratty Family Foundation commissioned and donated these works of art to the city of Orillia. Several members of the Bratty family, who are long-time Gordon Lightfoot fans, were on hand for the event.