Meet the Man Behind Downtown Markham 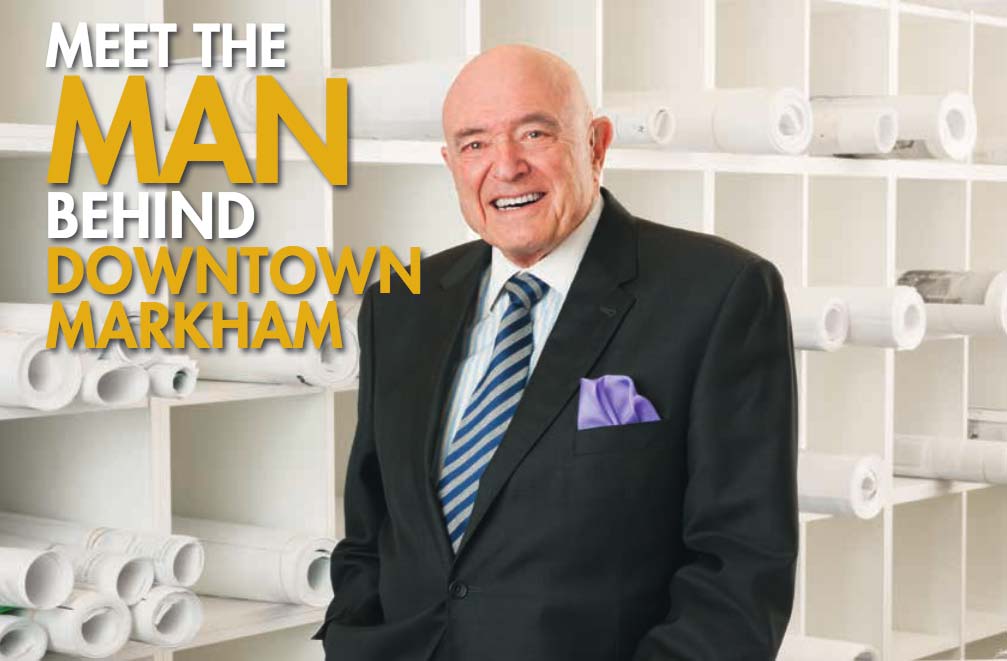 Published in The VOICE, The Markham Board of Trade’s quarterly Business magazine, Spring 2016. By Sarah Sweet, Photography: Dave Starrett

Just a few weekends ago, Rudy Bratty found himself turned away from a condo presentation centre. The place was packed. “I’m sorry, sir, there’s no spot to park,” an apologetic attendant explained. But Bratty wasn’t the least bit frustrated. “I can’t tell you how happy you make me feel to say that,” he said, before driving off again.

There’s a good reason that Bratty was delighted rather than miffed: the condo presentation centre was showcasing residential options in Downtown Markham, a project being developed by the Remington Group, of which Bratty is chairman and CEO. He couldn’t get in because so many other people were thinking of buying in. “There’s been a fantastic response so far,” he tells me during a recent telephone conversation. “They sold quite a few just that weekend.”

It’s not surprising that Downtown Markham is inspiring a whole lot of interest. The $4 billion, 243-acre project near Warden Avenue and Highway 407 is the most ambitious mixed-use development in Canada. Scheduled for completion in 2025, it will boast 2 million square feet of retail and dining space, between 7,000 and 8,000 residential units in condo towers and townhouses, 3.4 million square feet of office space—insurance provider Aviva is one of the companies that has already signed on— and a new campus for York University.

Those who live and work there will have access to a wide range of amenities and features: transit, art installations, restaurants, a hotel, a movie theatre, and green spaces galore. And they won’t have to sacrifice conscience for convenience— Downtown Markham will end up being the largest group of LEED-certified buildings on the continent, which means it’s green- minded and sustainably designed.

Downtown Markham is just the latest chapter in Bratty’s involvement with the city. In the 1970s, when most development was occurring in places such as North York, Scarborough, and Etobicoke, Bratty saw the potential in local land. “We had the foresight to see what could happen in an area that you needed time to develop,” Bratty explains. And just as he’d thought, when the York- Durham sewer began servicing his land parcels, their value increased considerably. He acquired additional land in Markham and in other growing municipalities, including Mississauga and Vaughan (where Remington is headquartered)—and his company grew as well. “If I had to attribute our success to one thing, it would probably be buying land the right way, at the right time. You make more money in land, in my opinion, than in any other place in real estate, if you buy it right and develop it right.” It’s no stretch to call the man a real estate mogul.

At the end of the 1980s, with land prices climbing, the company turned its attention to constructing houses. Although it represented a new direction for the firm, it was not unfamiliar ground for Bratty.

His father, Donato, an Italian immigrant, established a business that built two or three houses each year, and, remembers Bratty, “I would work from the day I could walk.” His father took him to the building site every Saturday, and even as a youngster, Bratty would pitch in, bringing water to the workers. “I had a great affection for building homes,” Bratty says, “seeing what my dad was doing, and then wanting to do it myself.”

Which is why when he was just 17, he and two other teenagers put together $3,000 each, bought six lots from what was then the Township of North York, and proceeded to build six houses. Although they couldn’t manage the plumbing and electrical aspects of the project, they took care of virtually everything else: “We did the bricklaying and the carpentry work, and we even put the shingles on ourselves.”

The three ended up making a healthy profit, and Bratty was pretty sure he had it made. “I was on top of the world,” he admits. But his father had other ideas: having received little formal education himself, he was determined that his son go to university. “I got a B.A. as quickly as I could,” Bratty says. He then returned to his father and announced, “All right, now I got a B.A. You’re gonna be happy, because I’m educated. Now let me keep on developing and building.”

But a B.A. was not quite enough to satisfy Donato Bratty, and so his son headed off to Osgoode Law School. After he graduated in 1957, he and a partner founded their own firm, which flourished as a new generation of Italian immigrants looked for representation and advice from within the Italian-Canadian community. He stresses that he’s grateful for his father’s advice and direction and has “absolutely no regrets,” but says, “I was really in my heart of hearts a businessman, a developer, a builder.”

When Remington set its sights on home- building in the late ’80s, the focus was on single-family homes. “The concept of a condo was not even in anybody’s mind at that time,” says Bratty. “A driveway, a garage, a front yard, and a backyard were very important.” At first, that’s what he envisioned for the Downtown Markham site: a neigh- bourhood centred on detached houses.

But in the mid-’90s, Don Cousens, then mayor of Markham, suggested the company consider a different approach. He and other members of city council were interested in picking up on a trend gaining traction in parts of the United States, which saw suburban developments engineered to function like urban downtowns thanks to a combination of commercial, residential, and cultural spaces and an emphasis on walkability. Remington also became fired up by the vision, and Bratty now counts bringing it to life as his proudest professional achievement in Markham. “It’s a very fine project that I have to take some credit for,” he says with a chuckle, “but I also say the City of Markham did a great job in how they wanted it developed.”

Bratty sees a bright future for Downtown Markham, and he’s just as optimistic about what lies ahead for the Remington Group. That’s because he knows the company is in good hands: his four sons—Matthew, Chris, Mark, and Michael—all have critical roles within the organization. And Bratty Sr. couldn’t be happier about that. “The greatest thing I have is family—it’s not money, it’s family. We meet every night, here at the office. The last meeting is always a meeting with the sons. They come over every Sunday with their kids—I’ve got eighteen grandkids—and they’re there every Sunday and every holiday at my house.”

As the interview draws to a close, I warn Mr. Bratty that I’m about to ask him a question that he’s almost certainly sick of hearing. “I’m never sick of hearing anything—don’t say that,” he immediately reassures me. So I forge ahead: He’s 83 years old. He’s been working since he could walk. His company’s future seems secure and promising. Is he ever planning to retire? “Oh, yeah, I’m sick of hearing that,” he quips. “And the answer is no. I do not intend to retire, because I enjoy what I’m doing so much… As long as my mind keeps working and my body keeps walking, then I’ll keep on working.”

Meet the Man Behind Downtown Markham

Contrast is the not-so-secret ingredient to creati